For decades, the goal of increased government financial transparency has been widely shared across political parties and stakeholder groups. The Financial Data Transparency Act (S.4295), proposed by Sen. Mark Warner, D-Virginia, and Mike Crapo, R-Idaho, takes a major step toward openness and accessibility by directing seven financial regulators, including the Municipal Securities Rulemaking Board, to develop "machine-readable" data standards that accurately reflect the existing reporting standards. So, it is surprising that this transparency measure has attracted stiff opposition when it has proven so successful in corporate reporting. READ MORE HERE. 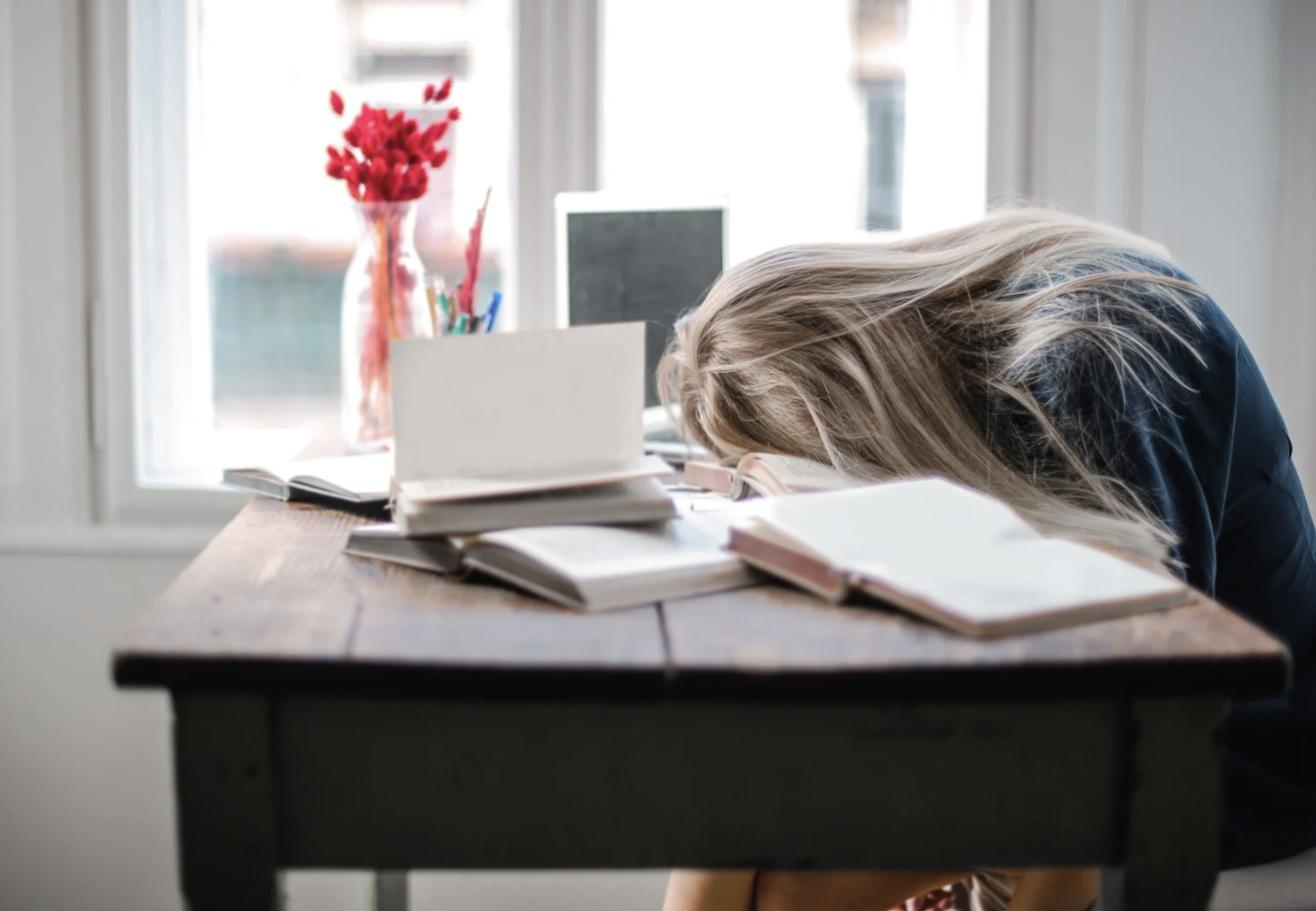 This got me thinking about new government initiatives and my reaction to change. I started this new position at Truth in Accounting last summer. And I won’t lie to you. Starting something completely new has been hard. There were a few times where I wasn’t sure “hard” was worth it.

October 25 Official Launch of the Truth in Accounting Project at the University of Denver
Are Government Officials the Best Ones to Manage Pension Funds & Social Security?
What are the Biggest Issues Facing Government Finances?
These and other questions will be explored. 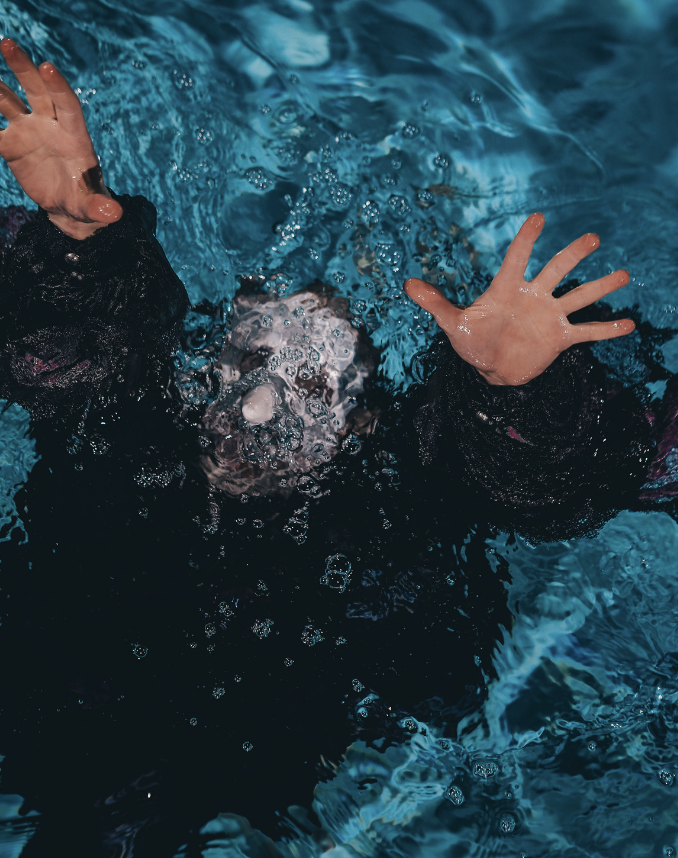 The American Rescue Plan (ARP)  was enacted to provide state and local governments with the money needed to rescue their budgets and economies during the pandemic. The Treasury administered over $1 trillion of funds appropriated through the legislation. Almost $195 billion went to the states mostly based upon the number of unemployed people in each state. According to the US Treasury, the Act provided funds for many state and local projects, including “affordable housing, quality education, and public health to reduce the health, economic, and educational disparities that left them more vulnerable to COVID-19.” READ MORE

Deferred Inflows, deferred outflows, oh my!
Have you ever looked at a governmental annual comprehensive financial report and wondered what is going on?

The Thing About Friends: They Keep Us Grounded

TIA recently completed our analysis of the 50 states and will release the results on October 25. Some seismic shifts occurred due to Covid-relief money and last year's stock market gains. Stay tuned!

While trying to explain the overarching thesis of the analysis to a friend, it was brought to my attention that some people think the terms financial statements and budgets are interchangeable.

In her exact words, "I thought those were interchangeable accounting jargon thingies!" (no kidding)

Sometimes we are asked why we at Truth in Accounting care so much about total government debt. People suggest government debt is like our mortgages. We only need to worry about making the next month’s payment. If we can pay our bills today, why worry about tomorrow?

Well, that is certainly a nice thought. The only problem is, typically, our mortgage is backed by an asset - our house. If we lose our jobs and know we will not have income for the next year, we will have the option to sell our homes to eliminate the debt. The debt is only a debt so long as we are financially responsible for the underlying asset from where the debt originates. Once we sell the house, the debt disappears, and we move forward in whatever manner makes sense. READ MORE

In Support of Senate Bill 4295

This is written in support of S. 4295, the Financial Data Transparency Act of 2022. It is bi-partisan legislation. Senator Warner (D-VA) and Senator Crapo (R-ID) are sponsoring a bill that would require the Municipal Securities Rulemaking Board (MSRB) to "establish data standards'' and to "scale" reporting requirements for "smaller regulated entities." These entities would include state and local governments. This legislation supports the use of technological advances toward developing standardized financial information that already exists for publicly traded companies. Truth in Accounting wholeheartedly supports this legislation. READ MORE

President Biden has proposed the cancellation of federal student debt across the country.

Students from every state accumulate debt. As indicated by the Data-Z chart below, on average students in Utah graduate from their undergraduate studies with student debt of $18,344, which is the least amount of all of the states. The four other states with the least amount of average student debt are New Mexico with $20,868, California with $21,125, Nevada with $21,257 and Wyoming with $23,510. READ MORE 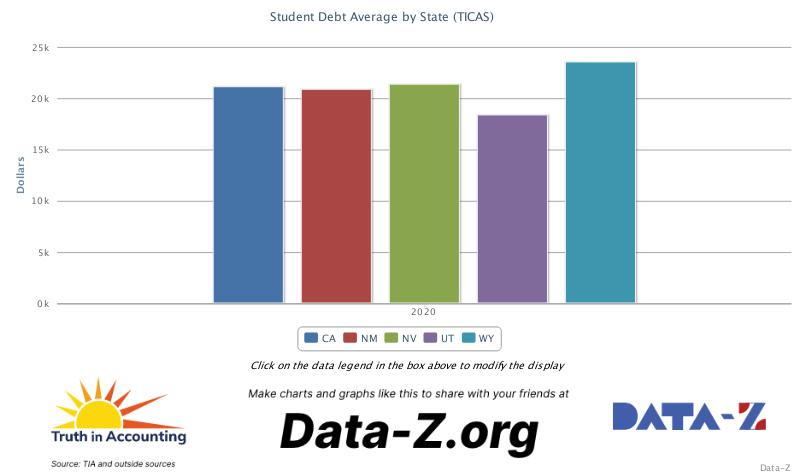 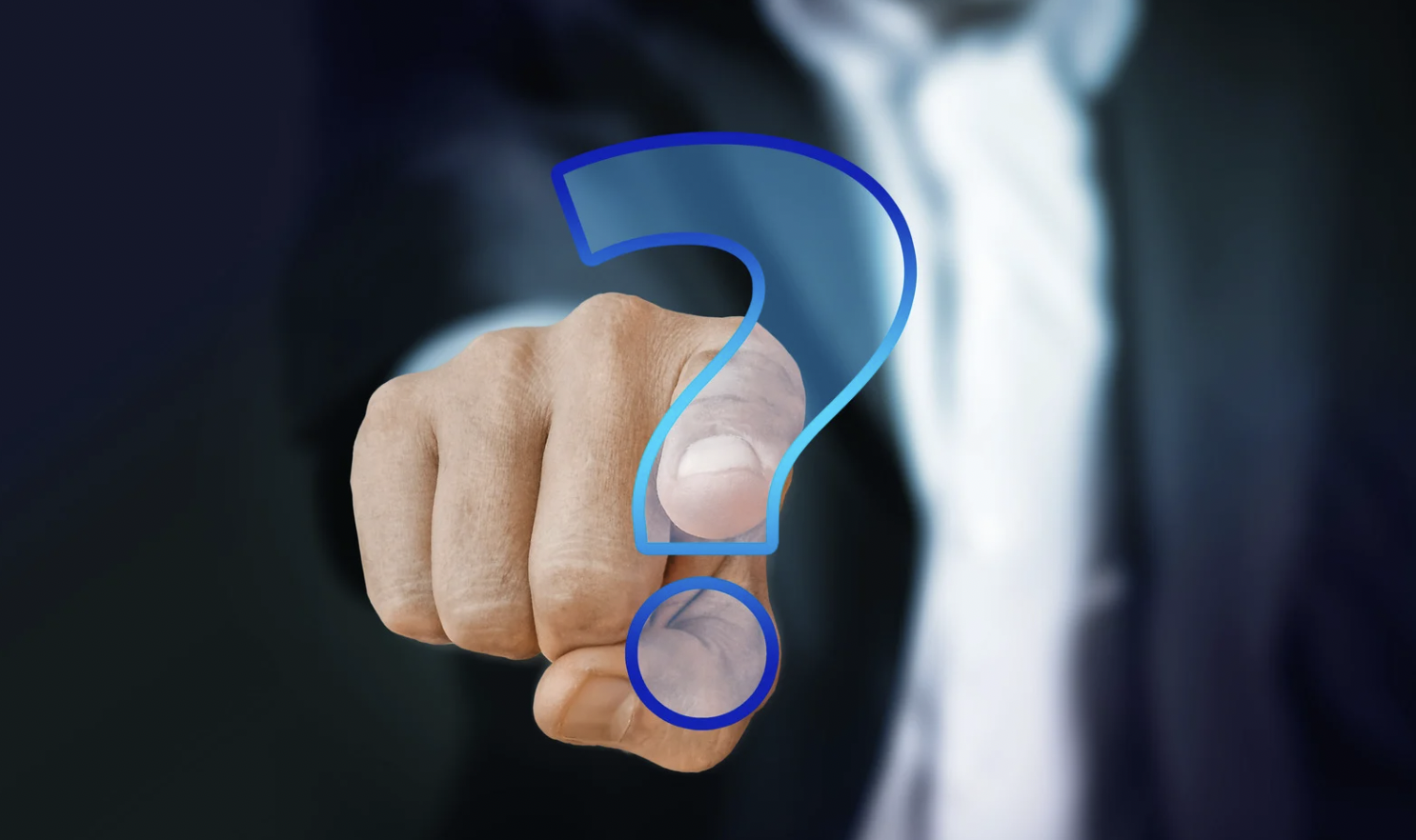 Have you ever wondered if your state’s pension plans are actually funded?

If you are a government employee, have you ever questioned whether your pension is funded? You would assume that as a state employee, you can trust your pension has the funds to pay its retirees. As of 2022, that is often not the case. READ MORE 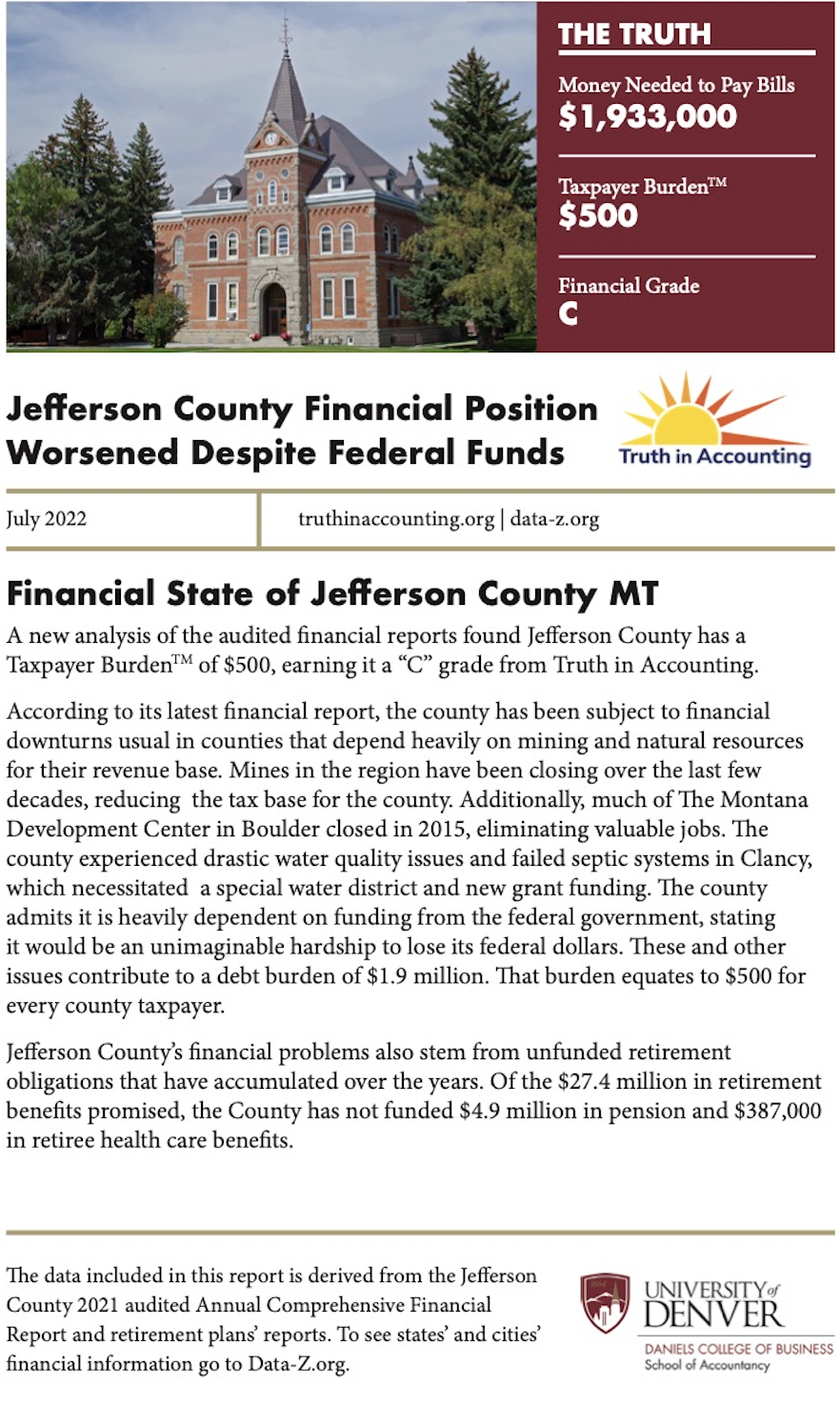 A new analysis of the audited financial reports found Jefferson County has a Taxpayer BurdenTM of $500, earning it a “C” grade from Truth in Accounting. READ MORE

At Truth in Accounting, we analyze government financial statements and aggregate that data into annual reports. One of our most significant concerns when examining these financial documents is the state of pensions. They are often the most considerable debt a government carries. We fear that the valuation of pensions can be distorted for a few reasons. The first is that pension valuations may be up to thirty months old. This is explained in the linked article. A second reason is that the values reported are subject to an accounting concept called “recognized and realized.” READ MORE