A waterfall of red ink underneath Buffalo’s ‘surplus’

On Monday, November 11, The Buffalo News reported on the results in the City of Buffalo’s annual financial report for fiscal 2019. The article was published well before Buffalo’s comprehensive annual financial report (CAFR) was publicly available. The article was headlined “Buffalo closes last year in the black, expects casino funds to start rolling in.” The first sentence was:

“The City of Buffalo closed out its 2018-19 fiscal year with a $948,715 surplus, as expected, thanks to a $7.5 million advance from the state on $17 million in disputed casino funds owed by the Seneca Nation of Indians.”

A review of the actual CAFR tells a different story. Buffalo had a better year in 2019 than in 2018, to be fair, as the city’s general revenue exceeded net expenses.

Buffalo’s reported surplus arrived in the city’s general fund, where measured revenues exceeded expenditures for the 2019 year. But the city’s overall financial condition is remarkably poor – despite (or because of) the fact that its pension funds are relatively well-funded.

The acronym OPEB stands for Other Post-Employment Benefits. New accounting standards have finally required state and local governments to include these obligations as liabilities on the balance sheet. OPEB includes retiree health care benefit promises, as well as things like life insurance. In Buffalo, the OPEB dollar amounts are jaw-dropping.

The table below lists ten cities ranking from 81 to 90 in the U.S. in terms of population, including Buffalo, and reports the total OPEB liability for those cities (and their component units) in the latest annual financial report. The table is ordered from lowest to highest OPEB dollar amount. Dollar amounts are in millions.

OPEB is only one liability. As noted, Buffalo’s pension fund is in relatively good shape. But that massive $3.5 billion OPEB hole explains why Buffalo’s overall financial condition is so poor. The table below shows the unrestricted net position for the same ten cities, ranking them from best (Gilbert, Arizona) to worst (Buffalo, NY). Dollars are in millions.

Here’s a chart showing the unrestricted net position for these ten cities. Unrestricted net position arrives after liabilities are deducted from assets, and is akin to shareholder equity in the private sector (and the “Money Available (Needed) To Pay Bills” that we calculate for governments at Truth in Accounting). Buffalo is that waterfall at the far right. Dollars are in millions. 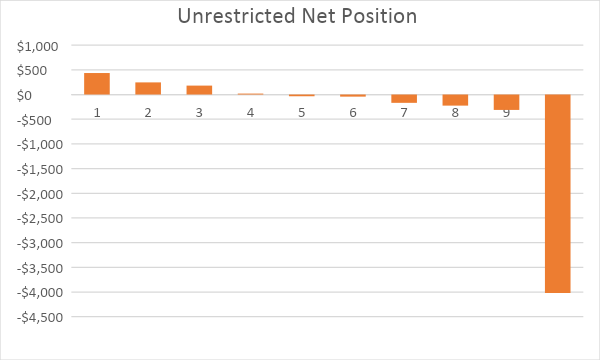 So much for that “surplus.” 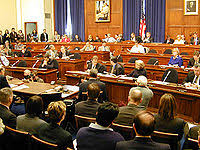