We recently updated our Data-Z website to include 2020 data for single-family housing permits in the 75 largest cities in the United States.  I just took a peek at Chicago and compared it to Detroit and Stockton since 2009 (the bottom of the 2007-2009 housing and financial crash).

The chart below shows permits for new homebuilding in those three cities, based on data we index to 2005=1. We index the data to help compare cities of different sizes. 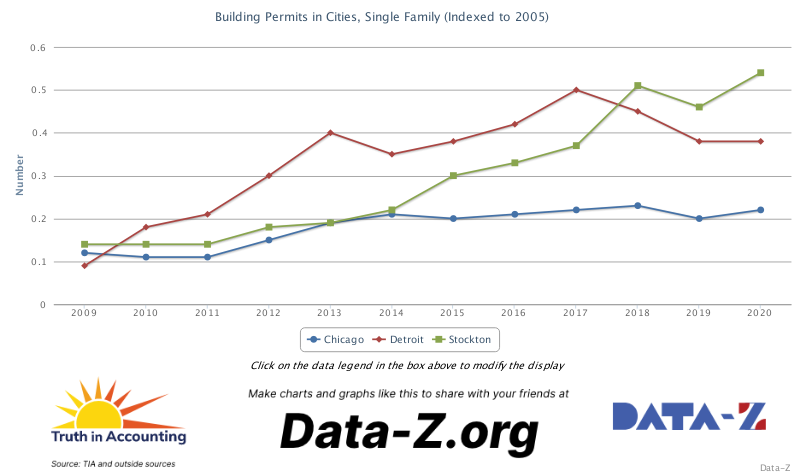 Back in 2009, housing permits had fallen in all three cities to just 10-15 percent of where they were in 2005, before the housing crisis. They have since been recovering, but much faster in Stockton and Detroit than in Chicago.

All three of these cities have had governments with historically bad financial positions. But in 2012, Stockton declared bankruptcy, and new home construction rose dramatically after that. A year later, Detroit chose the same path.

City governments are organized as municipal corporations, so they may have the option to reorganize under Chapter 9, a federal bankruptcy law. However, that law provides that cities may only do so if they have specific authority from the state. In Illinois, that authorization has not been granted.

Perhaps it should have been (be) granted?