How big is Illinois’ balance sheet? 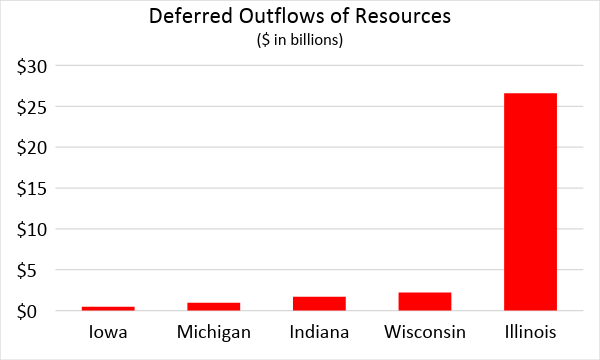 A question like this is normally a no-brainer. You look at total assets, report what they say, and move on.

In government accounting, however, “normal” can get pretty strange. Especially in Illinois.

Here’s a link to Illinois’ latest Comprehensive Annual Financial Report (CAFR). You can see the balance sheet (the “Statement of Net Position”) on page 32.

So we really don’t know how big Illinois’ balance sheet is right now. The latest date for which we have audited financial statements with a balance sheet was 616 days ago.

The Comptroller has clearly been busy in recent months, but maybe the financial reporting process wasn’t as high on the agenda as normal, or at least on her agenda. Last year, Illinois’ CAFR was dated March 15. It will be interesting to see how long it takes the Comptroller’s office to deliver the report this year.

What does “Deferred Outflows of Resources” sound like to you? Are they a good thing, or a bad thing?

Trouble is, interest rates began to fall over coming years, leading in some cases (like the City of Chicago and the State of Illinois) to massive liabilities for losses on these transactions.

In accounting, there are debits and credits. When you recognize a liability, you credit the account. But in the dual-entry system, every credit has a related debit, and vice versa.

In Accounting 101, they taught us that when you recognize a liability you previously didn’t acknowledge, the offsetting debit is a loss, one that hits the income statement and, in turn, the net position.

But that’s not what GASB did on those swaps losses.

Instead, the new “Deferred Outflows of Resources” concept was born. The offsetting debit (in Chicago and Illinois) for hundreds of millions of dollars of liability arrived in that section of the balance sheet.

These deferred outflows are added to the assets in calculating the net position! Therefore, they insulate the reported net position from taking a hit from the hundreds of millions of dollars in new liabilities recognized on the swaps.

If governments hadn’t entered into these swap arrangements, they would have been better off, so this appears like an overly creative way to avoid reporting a loss. There may be a good reason for this accounting treatment, but I haven’t seen it explained well yet.

How about the latest Illinois balance sheet? How big are those deferred outflows of resources? What exactly is in that stuff?

Keep looking down the balance sheet on page 32. Below total assets lies the “deferred outflows of resources” section. Looking at the primary government total, what do you see?

In addition to the $54.3 billion in total assets in the upper section, there is another $26.6 billion in deferred outflows! They are more than half of total assets!

And the biggest line item in there? “Deferred outflows of resources – pensions.”

That $26.6 billion is added to the $54.3 billion in assets, before subtracting liabilities (and deferred inflows), to get to the net position.

So it sounds like that $26.6 billion must be a good thing, right?

Let’s look at the balance sheet for the previous year. It is also on page 32.  That year, there were only $12.2 billion of these “good things.” Deferred outflows of resources then doubled in 2017.

What happened?  Why did the deferred outflows double? That must be a good thing, if they are added to the assets, right?

When they fessed up, the liability got bigger. And the “deferred outflows of resources” got bigger too, effectively insulating the net position from a big hit that otherwise would have arrived given the larger pension liability. The impact of those changes in assumptions are then smoothed in, over time, for the income statement and balance sheet.

What do you think? Should governments be allowed to smooth their reported results like this?

Here’s a look at the total deferred outflows of resources reported by Illinois and neighboring states in fiscal 2017.

Having fun yet? Welcome to world of securing government financial accountability.