Illinois’ plunge into financial abyss: How bad is it?

In late August, the State of Illinois released its annual financial report for fiscal year 2020 – which ended June 30, 2020. In other words, we just learned about the results for a year that ended more than 400 days ago.

How did Illinois do?

Old information is still information, even if it’s all we have. And in Illinois’ case, the information isn’t just old, it is clouded by the arrival of a newly-qualified auditors’ opinion on the financial statements.

Still, it’s all we have. So, what exactly do we have?

Based on the reported balance sheet, Illinois’ overall financial condition deteriorated further, and at a faster rate than it did in 2019. Illinois primary government net position fell from a $187.7 billion deficit in 2019 to a $194.4 billion deficit in 2020, a greater decline than in 2019, and a result shared by looking at measures like the patterns in the unrestricted net position and the net position excluding deferred outflows and deferred inflows.

The June 30, 2020 fiscal year was certainly a strange year. It included the arrival of a worldwide pandemic in March 2020. So, Illinois’ 2020 report only included three months of pandemic impact – both negative and positive (in terms of federal government support for the state and its governments).

Truth in Accounting will release its full report on 50 state results in 2020 soon, now that Illinois’ results have finally arrived (We are going to go ahead without California, which is even more woefully late than Illinois).

Taking a longer-look back, however, how bad has Illinois’ financial position become?

Unfortunately, for a longer-term perspective, the reported balance sheet net position can be a misleading indicator, given fundamental changes in accounting for pensions and retiree health care benefits in recent years. 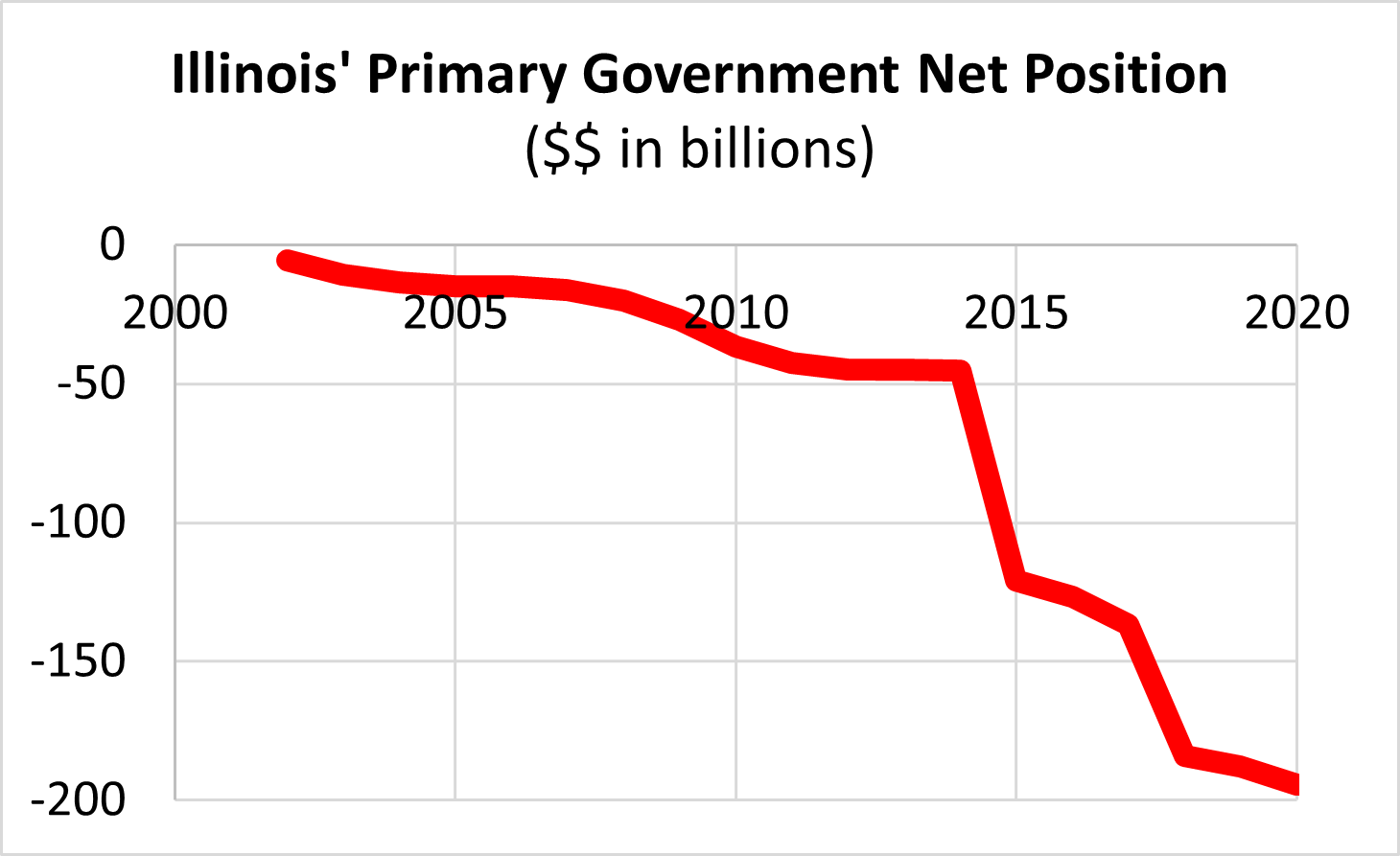 It looks pretty ugly. But it’s not as bad as it looks, even though some use this picture to illustrate how bad things have gotten. The problem is that with the long-tardy but welcome recognition of massive liabilities for pensions and retiree health care benefits in 2015 and 2018, the reported net position dropped seemingly calamitously. Granted, state and local governments should have been reporting those debts earlier, but the reported net position decline overstates the “true” financial deterioration.

So, how has Illinois done, from a longer-term perspective, adjusting for those accounting changes?

Truth in Accounting has been analyzing and publishing a net position adjusting for pensions and retiree health care benefits every year since 2009. TIA anticipated (and led) the changes in government accounting standards. Which means that TIA’s estimate of net position (“Taxpayer Burden”) has been prepared on a consistent basis over time, allowing a more valid perspective than using governments’ reported net positions.

So, how does that picture look for Illinois? Unfortunately, it’s still pretty ugly. 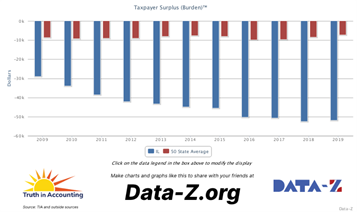 It’s important to take note of the starting point in that chart – 2009, amidst the worst economic and financial crisis (up to then) since at least the Great Depression. Illinois’ overall financial position deteriorated dramatically from 2009 to 2019, despite huge rallies in investment markets that benefitted Illinois’ woefully underfunded retiree benefit plans.

Truth in Accounting will soon release a full report on the 2020 financial results for the 50 states, including Illinois.