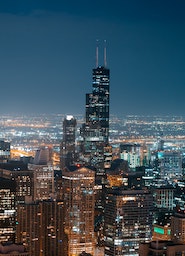 "The collective health of 11 pension systems that cover Chicago and Cook County and local general government workers across the state mostly held steady in 2020, propped up by healthy investment returns and rising contribution levels for some of the funds that still fall short of actuarial standards.

Overall the results for 2020 laid out in the state legislature’s Commission on Government Forecasting and Accountability annual compilation were mixed and several recent pieces of legislation stand to influence results in the coming year, both negatively and positively.

Although it's a modest shift, the collective results from the funds do reverse a trend of rising unfunded liabilities.

Overall, the 11 funds closed out 2020 with $58.2 billion of unfunded liabilities, just slightly better than the collective tab of $58.4 billion for 2019 in last year’s report. Most exceeded their assumed rates of return in the 6% to 7% range but fell short of the robust returns above 15% most saw in 2019, so the pain of a potential drop this year in market returns may hurt down the road.

Local pension pressures weigh heavily on local government ratings and decision-making, driving some governments to issue risky pension obligation bonds, raise taxes, cut services, and privatize assets. On the benefit side, state and local governments have few options given state constitutional protections against the diminishment or impairment of promised benefits.

Statutory multiplier formulas based on employee payments — not based on actuarial requirements — are blamed for city and state underfunded pensions although some funds have phased in actuarially based contributions.

The improving health of Cook County’s system and the Illinois Municipal Retirement Fund that covers non-public safety employees who work in local governments across the state offset growth in the unfunded tab for eight funds that mostly rely on Chicago’s property tax base.

Chicago’s four funds along with the Chicago Transit Authority, Chicago teachers’ fund, Chicago Park District, and the Water Reclamation District of Greater Chicago saw their unfunded tab rise to $48.6 billion for a collective 33.9% funded ratio compared to $46.9 billion in 2019. The funded ratio was 34% in 2019.

The overall statewide burden totals is much higher after adding in the $139.9 billion from the state’s five-fund system based on fiscal 2021 results and $13 billion from the suburban and downstate police and firefighter funds based on 2019 results. Adding those to the unfunded tab for the 11 funds brings the bill up to $211 billion, based on the collective burden from COGFA’s most recent reports.

“The unfunded liability increases due to contributions being less than normal cost plus interest cost,” the report said. Actuarially based contributions began this year under the city’s pension funding overhaul that phased in higher contributions to the municipal and laborers funds over five years until reaching an actuarial formula with a 90% target set for 2058. Despite the shift, the fund isn’t expected to hit even a 50% funding level until 2051.

Chicago’s Policemen's Annuity and Benefit Fund mostly held steady and saw a slight improvement in the funded ratio. It carried $11.3 billion of unfunded liabilities and a 23.1% funded ratio compared to $11.1 billion and a 22.3% funded ratio in 2019.

The fund along with the firefighters' has received actuarially based contributions since 2020 after a five-year ramp in payments and is slated to hit a 90% funded ratio required by state law in 2055 but it will take until 2043 to hit even a 50% funded ratio.

A state-approved pension enhancement for some Chicago firefighters that was opposed by Mayor Lori Lightfoot will add $180 million to the fund’s existing unfunded liabilities. The legislative change approved last year and signed by Gov. J.B Pritzker made permanent a cost-of-living adjustment enhancement lawmakers previously approved every few years, meaning the full cost was never accounted for in actuarial assessments.

Only one of the four funds has posted on their websites results for 2021. Chicago will include the actuarial reports in its 2021 annual financial report published later this month or in July.

The Chicago Park Employees' Annuity and Benefit Fund's unfunded liabilities rose to $848 million from $821 million while the funded ratio dipped to 28.7% from 29.9% in 2019. The parks assume a 7.25% rate of return and exceeded it at 9.3% compared to 17% in 2019. "Unfunded liability increased due to total contributions being less than normal cost, plus interest cost," the report reads.

A pension funding overhaul approved by lawmakers last year moves the fund off a path to insolvency to a full funding target in 35 years, with bonding authority. It puts the district’s contributions on a ramp to an actuarially based payment, shifting from a formula based on a multiplier of employee contributions.

The system’s funded status has further improved for 2021 to 58.7%, according to the district, and it’s aiming to reach 65% by 2026. Illinois Gov. J.B. Pritzker signed legislation that gives the district $600 million in pension obligation bonding authority and formally puts in statute a track to reach a 100% funded ratio by 2050 — up from 90%.

Funded ratios been on slow rise since the county began making supplemental contributions in 2016 with proceeds of sales tax hike, including more than about $300 million in 2020 and $340 million in 2021 and this year.

Still, projections forecast looming insolvency in 2048 because the supplemental payments have not yet been set in state statute with negotiations still ongoing between the pension fund, union, and county on legislation.

Under the current funding policy the Cook County Forest Preserve Pension Fund is projected to run out of assets by 2042 if all future assumptions are met and no additional contributions are made," the report warned.

The district is banking on voter approval of a referendum slated for the November ballot that would raise its property tax rate allowing it both to fund land acquisition and improvements, stabilize its finances, and to raise pension contributions.

“The County Board should be prepared to take swift action if the Forest Preserves’ upcoming property tax referendum does not pass,” said Chicago Civic Federation President Laurence Msall said in the organization’s review of the county’s 2022 budget.

Read the full article on: The Bond Buyer