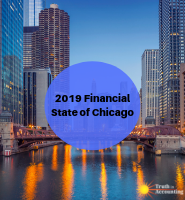 Government finance and transparency watchdog Truth in Accounting (TIA) released its annual report today on the fiscal health of the City of Chicago. This year’s report found that Chicago owes $34.4 billion, the majority of which can be attributed to unfunded retirement promises for municipal employees. TIA gathers its data from Chicago’s audited Comprehensive Annual Financial Report (CAFR) and retirement plans’ reports for the 2018 fiscal year and is the only organization that analyzes municipal finances on this scale.

Chicago’s CAFR is due, according to state law, within six months of the fiscal year end. Chicago’s fiscal year ends on December 31. As of July 1, 2019, the 2018 fiscal year CAFR was not publicly available. On July 5, 2019, the CAFR was made available on the city’s website with a letter of transmittal backdated to June 28, 2019.

The level of Chicago’s indebtedness assessed from the CAFR can be difficult to contextualize, which is why TIA calculates this number as a Taxpayer Burden™, or the amount of money each city taxpayer would have to contribute to city hall for the city to be debt free. Chicago’s Taxpayer Burden is a staggering $38,100, which increased by $2,100 from the previous fiscal year largely due to increases in pension liabilities. And because Chicago Public Schools and the Chicago Transit Authority are separate entities, their debt is not included in this analysis.

“We found that Chicago’s leaders have failed to address the structural problems weakening its financial system, instead plugging the holes with short-term fixes,” said TIA founder and CEO Sheila Weinberg. “When the bills come due, Chicago politicians are going to face a lose-lose dilemma: reduce services and benefits, or fix the problem on the backs of future taxpayers.”

Fiscal accountability in U.S. politics often focuses on highly visible federal budgets or the national debt. Truth in Accounting has repeatedly found that poor budgeting and accounting practices at the city and state levels of government presents equally alarming threats.

The City of Big Shoulders sets sail on a spending -- oops, ‘investment’ -- spree

Look out for Zombie states, not only on Halloween