Off to a Bad Start

Three things to know about financials for the U.S. Government in Q1 2016

Events of the first three months of 2016 have made the U.S. government's finances worse than ever. The most critical event is the awful outcome of the federal financial audit, but two other events worth highlighting are the fact that President Obama gave his State of the Union Address without audited financial statements and missed his budget deadline for the 6th time. None of these events instill trust in our government or set us up for financial success. 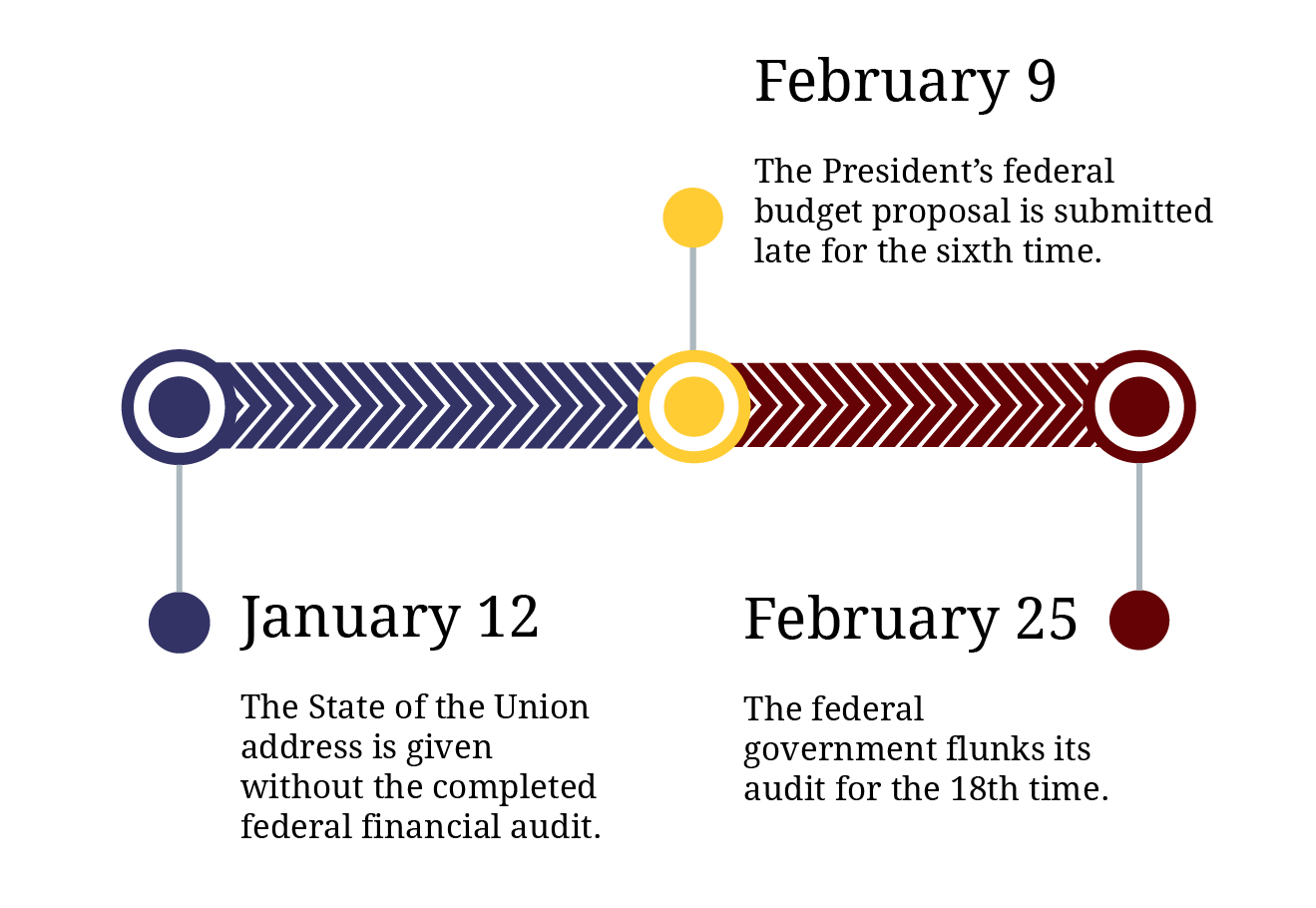 Here’s what you may have missed over the past three months:

In the private sector, a failed audit causes a loss of confidence in the company’s integrity, perhaps a drop in stock value and makes it difficult for the company to borrow money in the future. However, there seem to be no repercussions when the federal government flunks its audit.

The federal financial report should provide the President, Congress and the American people a comprehensive view of how the government is managing taxpayer dollars. But, apparently the government is taking no action based on the findings of the report, so the report is largely useless. Instead our leaders continue to use short-sighted checkbook accounting to prepare the budget and to make other long-term financial decisions.

Here are some astounding facts TIA researchers uncovered in this year’s federal audit: 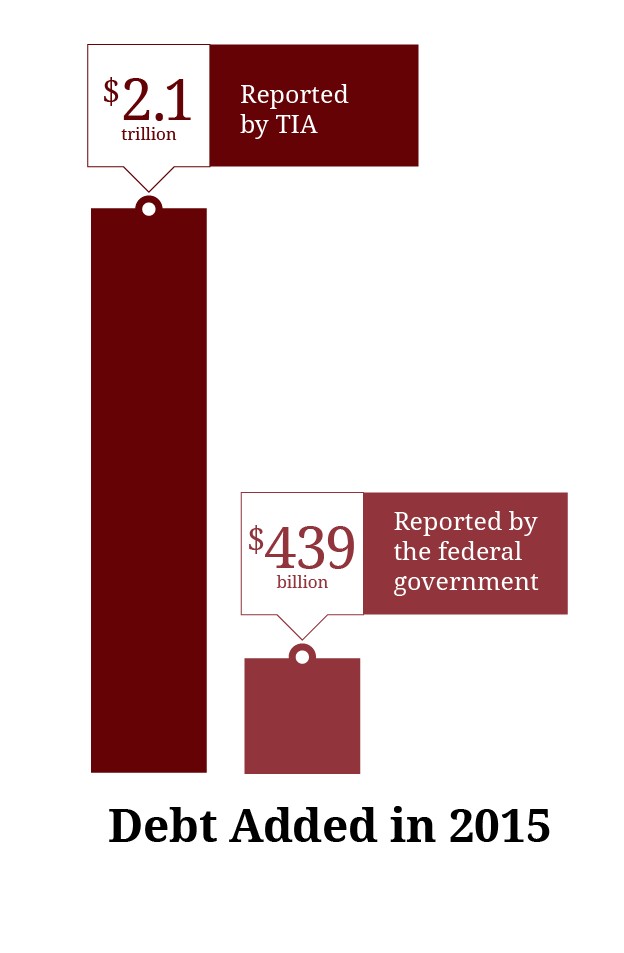 There is much more to uncover in the 2015 federal financial report, but the points above, and many others, significantly prevent the federal government from accurately accounting for its finances, determining how much programs costs and operating efficiently and effectively. This has been happening for too long and must be addressed. 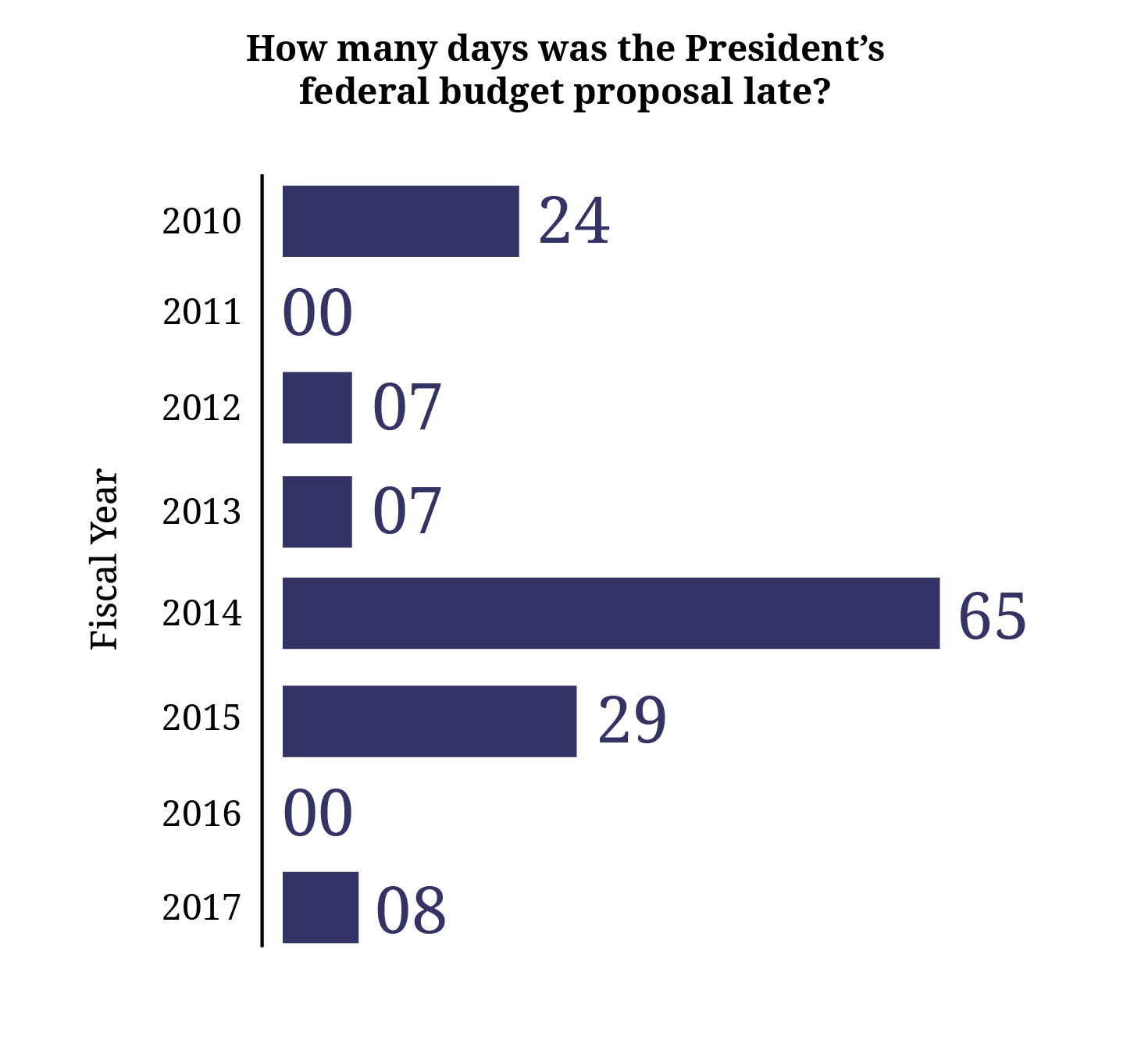 We highlighted this last month and we’re highlighting it again – it is unacceptable for the president to consistently miss the budget deadline.

Because the budget process is the largest federal financial decision-making tool, the timely submission of the president’s budget is crucial and legally required.

We encourage all presidential candidates to make a vow to submit every budget on time.

To make matters worse the Senate and House Budget committees refused to hold the traditional hearings that would allow top administration officials to discuss the proposal and answer questions. This hasn’t happened in four decades.

A major part of The State of the Union Address should be the financial condition of the federal government. Unfortunately, because the report was not completed until more than a month after The Address, President Obama could not provide citizens with this critical information about our federal finances.

To make matters worse, President Obama did not discuss our country’s financial position at all during his State of the Union address. This is alarming. Our national debt is growing at a rapid pace and the long-term health of Social Security and Medicare is not good. It’s the President’s job to raise these issues with Congress and be transparent with the American people.

These troubling events over the last three months is a reminder as to why distrust in our elected officials is at an all time high.  The lack of truthful, timely, and transparent financial information is increasing cynicism and mistrust in our government amongst the American people and it is a risk for our representative form of government. If the American people do not have accurate and timely financial information, how will they hold elected officials and those running for office accountable?