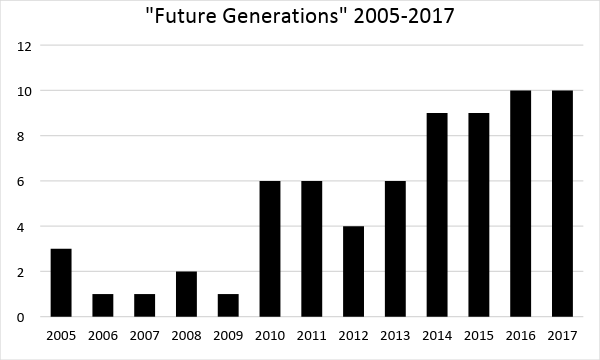 Future generations, by definition, don’t exist yet. But ...

If future generations could care about U.S. government finances, would they?

Let’s ask that question the other way around. Should the U.S. government care about future generations?

Whether or not the U.S. government should care, does the US government care about future generations?

Reading the financial report of the federal government, there are some simple cues that the government is at least giving lip service to the idea.

When faced with massive, complex financial statements, either for publicly traded companies or for governments, there are times when simple cues can help inform analysis.

The chart below shows the number of times the term ‘future generations’ is used in the annual financial report of the US government, from 2005 to 2015:

In turn, here’s a chart showing the number of times the word “sustain” appears, either in the term “sustainable,” “unsustainable,” or “sustainability.” These references arise most frequently in discussions on whether and for how long US government finances are sustainable, in light of the implied massive future increases in debt and interest expense under current law, policy, and demographic expectations. 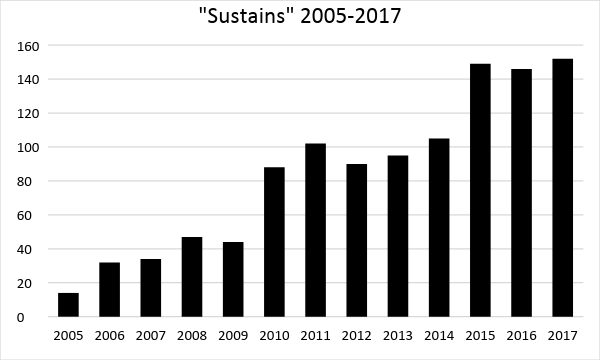 The references to ‘future generations’ and ‘sustain’ have both risen ten-fold since 2005, either because the government really cares more than it used to, or because it thinks it is more important to give lip service to the issues.

Either way, however, this is a bit of a red flag. Anyone who cares about young people, or future generations, or their own future after-tax, after-inflation wealth, should be paying attention to the public purse.