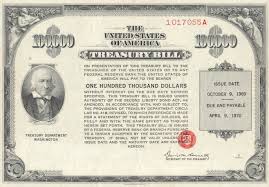 But that’s not the title on the report, which has a title page “U.S. Portfolio Holdings of Foreign Securities.”

Not to make a mountain out of a molehill, or anything, but what does this say?

The issue underlying this report is a massive one, but nobody picked up on this during a whole trading day?

How much confidence do we inspire in U.S. securities around the world? Is that confidence at risk, given the financial trends the U.S. government itself calls “unsustainable?”

Retaining that confidence is a key factor in our government’s financial position—and interest rates and inflation—going forward.

How do foreigners “hold” U.S. securities?  As the report itself notes, ownership of securities can be clouded by chains of intermediaries. And at the end of the day, even when well-identified, it’s not like the foreign owner has that stuff in the basement. Much of the total is “held” through custodians, including the Federal Reserve Bank of New York.

During dramatic moments in our history, like March 1933 and August 1971, we have learned that what we think we “hold” doesn’t turn out to be what we really hold in our banking system, with the “we” including foreign as well as domestic holders.

I’m reminded of two other fundamental, and well, deceptive phrases in accounting.

They include how corporate finance textbooks distinguish between “external” (debt and equity) financing, and “internal cash flow” financing.

Trouble is, the “internal cash flow” isn’t very internal, if it is really flowing through banks and other financial institutions.

And at the top of the balance sheet, the most fundamental “holding” deception takes place.

But like with most of these shenanigans, it’s a longer topic for another day.

What about the debt?

A response to the city of Phoenix's 'invalid' claim

2020 Financial State of the Cities