Can an "unsustainable" federal government backstop America for the coronavirus?

For example, heading into the 2007-2008 financial market disaster, American International Group (AIG) offered investors, and anyone else interested, some of the most complex financial statements on the planet – for “private-sector” enterprises, anyway.

As 2007 and 2008 progressed, AIG headed into a corporate disaster – with collateral consequences.

Warning signs weren’t so readily available in the reported income statement and balance sheet. In fact, the latter was still showing tens of billions of dollars in positive shareholder equity into mid-2008, even as the market had wiped those shareholders out.

But a simple, compelling clue was available, along with other judgments made by people concerned about the conditions leading to the financial crisis of 2007-2008.

That was a yellow flag, in hindsight or otherwise.

Well, consider another large (massive, in fact) financial institution – the Federal Government of the United States.

A few weeks ago, to deafening silence, the federal government issued its own annual report for fiscal year 2019, as it has since 1998.  A massive document, with highly complex financial statements and other reporting.

Our analysis of that report should be completed soon. It appears that the federal government’s financial condition deteriorated at a faster pace than in 2018. We will let you know when our accounting and financial analysis is complete.

But how about the words? The rhetoric?

Truth in Accounting’s “Data-Z” website offers a wide range of government financial, economic, and demographic statistics for local, state, and federal government entities.  We have also included a “Rhetorical Analysis” section for the federal government. For now, that section simply reports word counts for the frequencies of various words and phrases appearing in Uncle Sam’s annual financial report over time.

Here are some quick takes based on those word counts.

Uncle Sam’s finances are still trending rapidly toward “unsustainability.”  Back in 1998 and 1999, the report never mentioned the word “unsustainable.” The report's use of the word began to march significantly higher, however, as the report included lengthier and more pressing discussions questioning the future fiscal path of the United States under current law and policy. Last year, there were 16 mentions of “unsustainable,” the same as in 2018, but the upward trend is unmistakable. 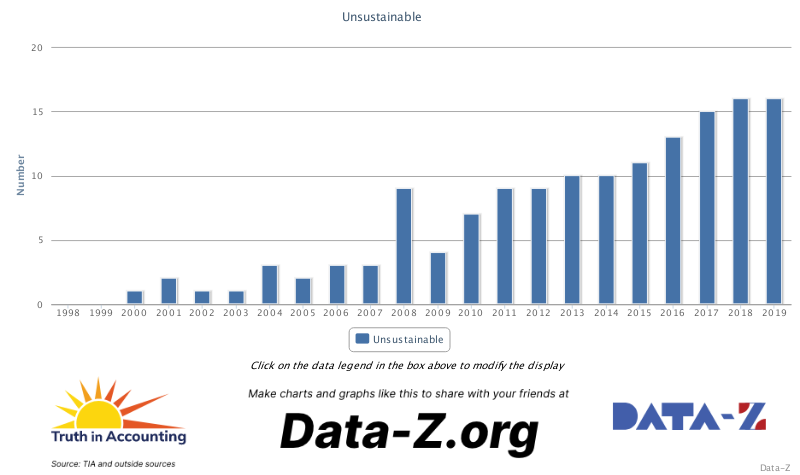 The reliability of the reported results remains in question.  The Government Accountability Office (GAO) delivered another disclaimer of opinion on the financial statements last year, as it has every year since the late 1990s. This is basically a “flunk” opinion, undermining the credibility of the reported results. Private sector companies most likely couldn’t survive two decades of disclaimer opinions on their financial statements, but our federal government has, at least so far. Here’s the number of times the word ”disclaim” appeared in the financial report since 1998. 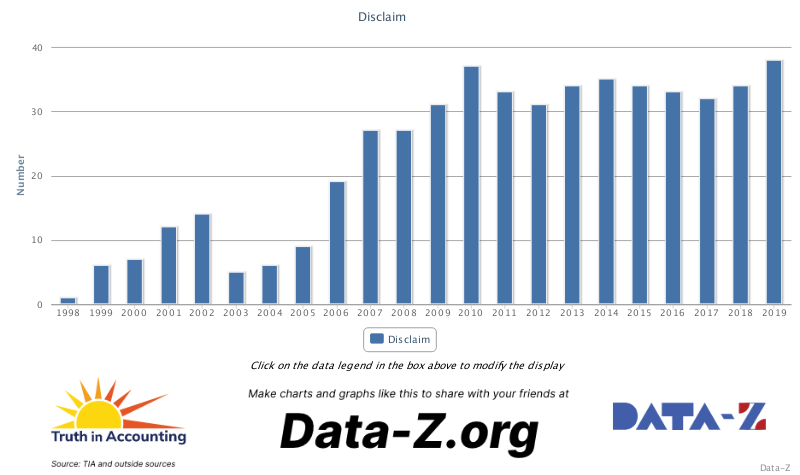 As noted above, we should have our financial analysis of the 2019 financial report of the U.S. government completed soon. But some simple rhetoric analysis can provide valuable perspective -- and potential warning signs.