Some states are especially keen on a popular vote for U.S. President

This initiative aims to eliminate state-by-state “winner-take-all” counting for electoral votes. In the words of the National Popular Vote Inc., a nonprofit organizer for the initiative, the system would “guarantee the Presidency to the candidate who receives the most popular votes in all 50 states and the District of Columbia.”

Curiously, the initiative would not eliminate the Electoral College itself.

Together with Colorado, the other states in the Popular Vote Compact include California, Connecticut, Hawaii, Maine, Maryland, New Jersey, New York, Rhode Island, Vermont, and Washington. 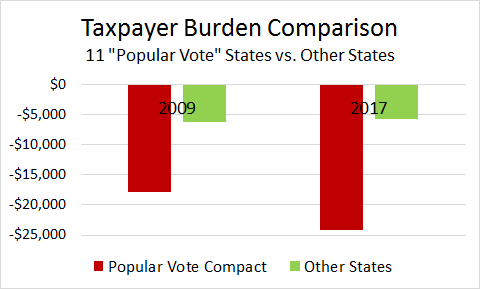 And the average Taxpayer Burden for the Popular Vote Compact states has deteriorated 35% since 2009, in contrast to modest improvement, on average, elsewhere throughout the Union.

Here’s one way to reflect on the motivations for the popular vote initiative: there are also movements afoot in some states to enact a balanced budget amendment in the U.S. Constitution. As a general rule, states that have “signed on” to that initiative tend to be in much better shape, financially, than the states that haven’t.

Is it possible that states are voting with their wallets? Especially relating to any possible federal bailout for states in bad financial condition?

(Note: The image at the top of this article is a certificate for the electoral vote for Louisiana for Rutherford B. Hayes in the Tilden v. Hayes presidential election in 1876. See "The Disputed Election of 1876")