The Governmental Accounting Standards Board continues down the wrong path

At its July 1, 2021 meeting the Governmental Accounting Standards Board (GASB) continued its deliberation about the way state and local governments should account for their general and other budgeted funds, called the governmental funds. The budget is each government’s major financial decision-making process, therefore reliable, understandable, and transparent accounting for the general fund and other budgeted funds is critical.

After years of advocating, Truth in Accounting and others were able to convince GASB to require governments to report their pension and retiree health care liabilities on their balance sheets. So now the GW statements show a fairly reliable picture of each government’s financial condition and activities. Now it is time to clean up governmental funds accounting.

That is why at Truth in Accounting we were hopeful when GASB started its “Financial Reporting Model” project which includes a review of the way accounting is done for governmental funds.

During the meeting, GASB members and staff stated they felt the use of the short-term perspective provides the information needed to judge a government’s “fiscal accountability.” Even though I have been a CPA for decades I had not heard of fiscal accountability until I read it in one of GASB’s documents. Evidently, GASB started to use this term years ago when it first outlined the accounting for governmental funds, in GASB Statement 34 (GASB S34). After doing extensive research on the origin of the term fiscal accountability I determined that GASB had hijacked the term and misused it to justify the need for accounting for governmental funds on the short-term perspective. 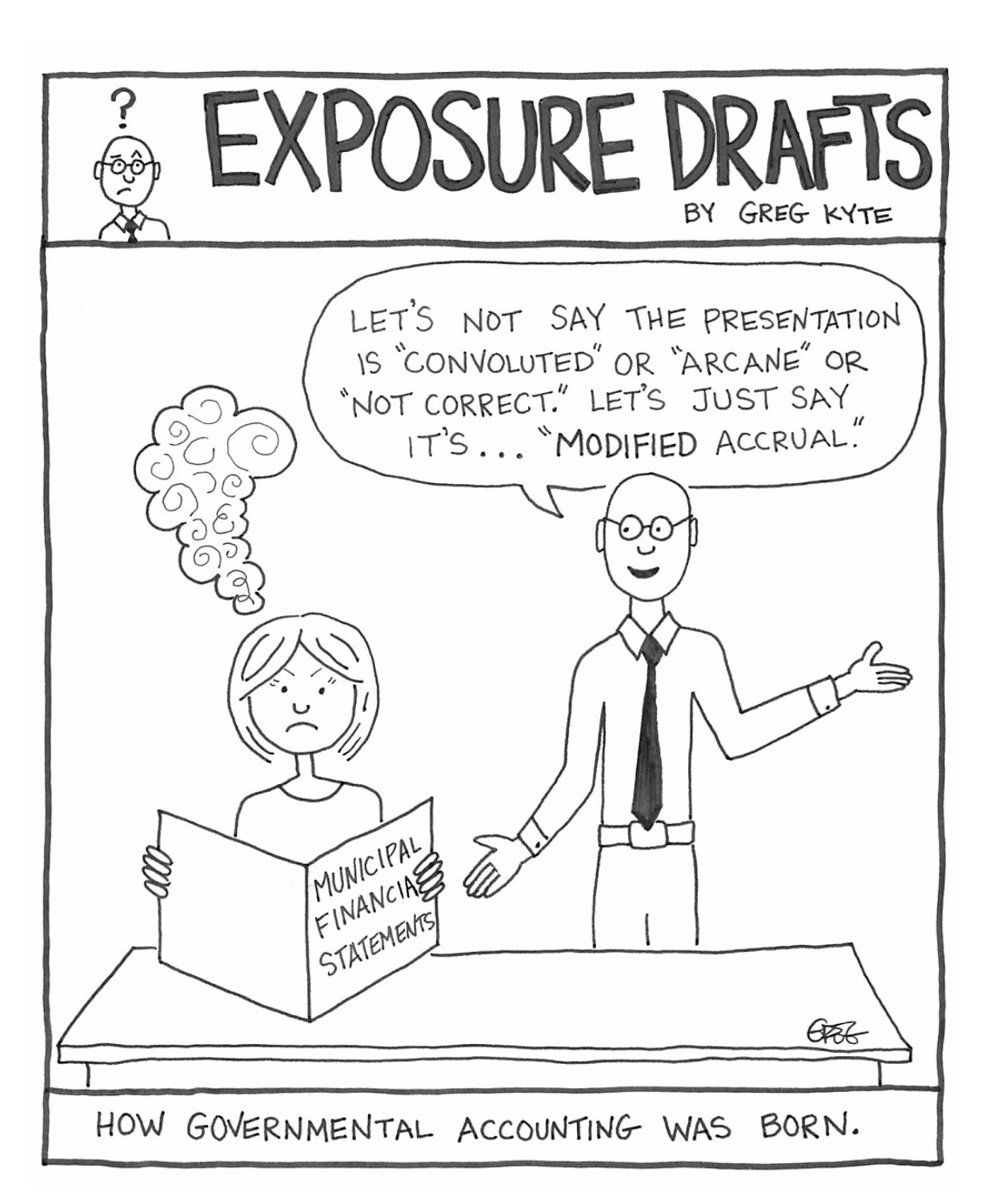 To confirm my suspicions, I reached out to Martin Ives, former GASB vice chair, who was on the Board when I believe the term fiscal accountability was first used by GASB members and staff. In an email Mr. Ives commented, “When I read about the distinction between fiscal accountability and operational accountability in GASB S34, I felt that it was pure, unadulterated b*** s***, written in order to justify retention of modified accrual accounting in the funds.” Mr. Ives was so emphatic that he actually spelled out the profanity in his email.

Mr. Ives mentioned, “I think I also understand the meaning of just plain ‘accountability’ and, in my opinion, a government cannot be accountable if it fails to accrue expenditures applicable to a period, but that it pushes off to the future (like pensions and OPEB).” OPEB stands for other post-employment benefits which mostly include retiree health care benefits.

Mr. Ives also confirmed that he also had not heard of fiscal accountability until the GASB S34 discussion stating, “As you know, I served on the GASB from 1984 - 1994 and I never heard the terms fiscal and operational accountability. I was heavily involved in discussions leading to GASB Concepts 1, wherein we spoke of accountability and interperiod equity.” He stated his belief that “all 5 Board members felt at the time that interperiod equity implied accrual basis accounting.” The short-term perspective does not use accrual basis accounting. Specifically, the governmental funds’ statements do not include all of the accrued expenditures applicable to the period, such as earned pension and OPEB benefits.

Mr. Ives also emphasized, “While I was on the board I recall Bob Freeman (GASB member from 1990 to 2000) arguing the long-term liabilities simply did not belong in the (governmental) funds.” Mr. Ives continued, “I argued that he was absolutely wrong because those liabilities had to be paid from the funds and therefore had to be reported in the funds.” Mr. Ives asserted, “I therefore assume that the fiscal accountability nonsense was developed in order to provide some other means of justifying Bob's position.”

It appears that GASB members and staff are continuing to use their convoluted and inaccurate definition of fiscal accountability to justify the misleading and confusing short-term perspective accounting for governmental funds.