Too much money chasing too few goods (and services)?

Given the recent hubbub surrounding inflation, what is happening to money growth in the United States? How much faster has money been growing than the overall economy?  Is rapid money growth in recent years threatening higher inflation, now and down the road?

The modern congressional mandate for monetary policy dates to the Federal Reserve Reform Act of 1977, when Congress first identified the goals of “maximum employment,” “stable prices” and “moderate long-term interest rates” with the Fed directed to “maintain long run growth of the monetary and credit aggregates commensurate with the economy’s long run potential increase production …”

In other words, our Congress has seen fit to have 12 people (voting members of the Fed’s FOMC) manage the total amount of money and credit for more than 300 million other people.

In order to manage all that stuff, you have to count it up somehow. M2 is one of the main monetary aggregates that is still being calculated and reported by the Federal Reserve. M2 consists mainly of currency circulating outside of banks, demand deposits (checking accounts), and money market mutual fund balances.

The chart below shows GDP (Gross Domestic Product) and M2 (both in nominal terms, unadjusted for inflation) since 1981, semi-annually, with both GDP and M2 indexed to 1981 = 1.0. It shows an interesting if not alarming picture. 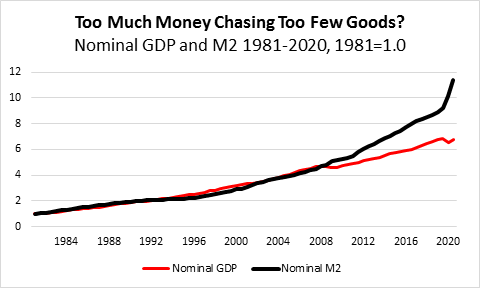 Beginning in 2008, amidst the financial and economic crisis and the Federal Reserve’s response to it (a response to a crisis in part the Fed’s own responsibility), the growth in the nominal M2 money stock (mainly currency circulating outside of banks, demand deposits and money market mutual fund balances) has significantly outpaced growth in nominal GDP – and the growth difference has spiked dramatically higher since the second half of 2019.

Since the first half of 2008, nominal GDP has risen about 45%, while nominal M2 has risen 144%, more than three times as fast as nominal GDP.

Inflation has sometimes been simply described as “too much money chasing too few goods.” The idea is that when money grows faster than production (GDP), prices can rise at a faster rate, reducing real (inflation-adjusted) production.

A longer story, of course, and analyzing monetary aggregates has gone out of fashion since the 1980s. That doesn’t mean they aren’t still meaningful, however.

Analyzing inflation matters for Truth in Accounting for a few reasons, including how inflation can serve as a tax. Accounting for the overall price level is subject to discretion, and can be a matter of debate. Some people are concerned that inflation is currently rising faster than government-produced statistics say that it is. Government produces its own report card, in a way, when it calculates measures of the overall price level. Analyzing how inflation is measured matters for understanding the truth.