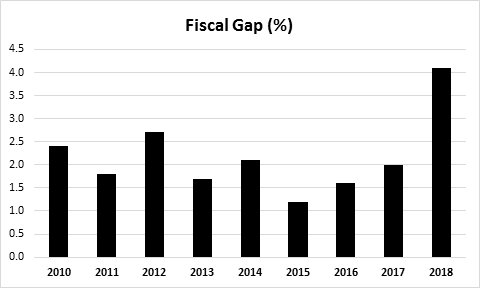 The federal government released the annual report of the U.S. Government for fiscal 2018 this afternoon.  The government’s finances deteriorated significantly, and more recent reports suggest the trend is only getting worse in 2019.

The number of times the word “unsustainable” appears in this report has been on a significant long-term uptrend, from zero times in 1998 to 15 times in 2017. It rose again to 16 times in 2018. The introductory “Results in Brief” section of the report had a new subsection this year, titled “An Unsustainable Fiscal Path.” In other words, the topic of sustainability of federal government finances is not only growing as a matter of discussion, but it is now explicitly emphasized, right up front.

The federal government’s estimate of the “Fiscal Gap” – the combination of spending cuts and/or tax increases needed to keep the government debt / GDP ratio from rising in the future – doubled in 2018. This figure is expressed as a percent of GDP. The government began reporting this calculation back in 2010. A high or rising fiscal gap represents deteriorating finances.

The increase in the unfunded federal debt provides another informative measure of the annual “deficit.” Our measure of the debt increased by $4.5 trillion for 2018, about four times as high as the government’s reported net operating cost.

Ask the Experts: Federal Bailout for cities: Helping or hurting?