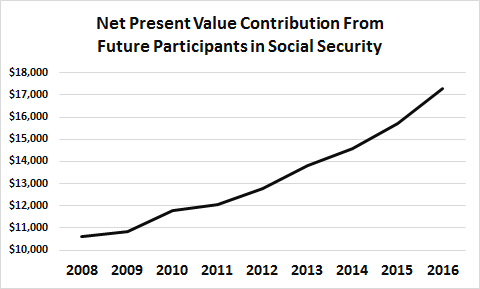 Yesterday, the Social Security Board of Trustees issued the annual report on the condition of the “Trust Funds.”

The report showed some marginal deterioration from the report last year, while the estimated insolvency date (2034) was unchanged from last year.

In arriving at the appraisal of Social Security finances, the Trustees report includes projections for tax revenue and benefit spending over a 75-year forecast horizon.  These include projections underlying both an “open group” as well as “closed group” perspective.  The “open group” is based on current and future participants, while the “closed group” perspective excludes future participants.

In the most recent Trustees' report, Social Security’s open-group unfunded obligation was reported at $12.5 trillion, compared to the $11.4 trillion estimated in the 2015 report.

Truth in Accounting believes a “closed group” perspective is valuable.  In stripping out the present value of revenues and expenditures for future participants, the closed group perspective sheds light on issues relating to intergenerational equity.

On a “closed group” basis, the unfunded Social Security obligation (roughly $30 trillion) reported in the 2016 Financial Report of the U.S. Government was over twice as high as the “open group” estimate.

Consider in turn the difference between the open-group and closed-group estimates, and what that implies for the legacy we have gifted our young and unborn children.

The open-group and closed-group estimate difference logically yields an estimate of the present value of the government's position in Social Security referencing future participants only.  That number is a) big, and b) has been growing significantly in recent years.

In other words, the open-group unfunded obligation reported by the Trustees relies heavily on a large net positive contribution from future participants -- implying a big negative for those participants themselves.

Discussion of the solvency of Social Security (and other programs like Medicare) relate to a topic of growing discussion in the annual Financial Report of the U.S. Government.  Trends in medical care costs, looming demographic changes and other factors imply radical future deterioration in the federal government’s finances under current law and policy.

Addressing questions about the sustainability of government finances can get pretty complex.  However, in complex situations, you can sometimes do simple and informative things.

The first chart below shows the number of times the words “sustainable” or “sustainability” appeared in the Financial Report of the US Government from 1998 to 2016. 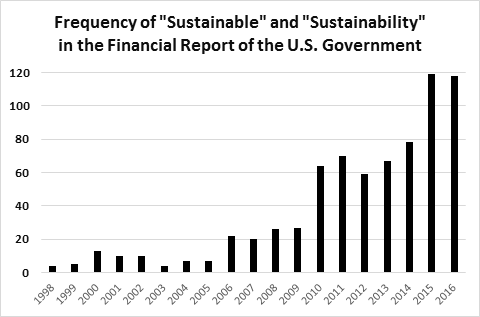 Things have been heading North, as concerns about the sustainability of Uncle Sam’s finances have intensified.

In turn, the next chart reports the number of times the words “unsustainable” or “not sustainable” have appeared in the same report, over the same time period. 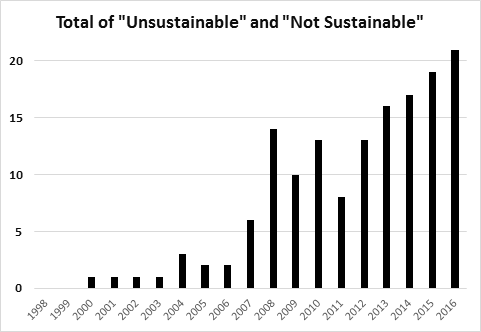 We may have some tumultuous times ahead.