Too much money chasing too few goods and services, Part II

As we’ve noted previously, the Federal Reserve’s “M2” monetary aggregate began growing significantly faster than the “GDP” measure of economic output in the United States beginning around 2008, amidst the 2007-2009 financial and economic crisis.

With the federal government’s massive fiscal and economic “stimulus” policies arriving together with a pandemic and government lockdowns, M2 growth has recently risen dramatically higher than GDP growth. 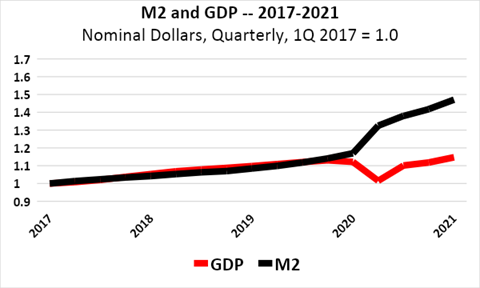 Earlier this week, the Bureau of Labor Statistics (within the U.S. Department of Labor) reported that the Consumer Price Index (CPI) rose in June at one of its fastest growing rates in more than a decade. Some people have been pointing to the fact that year-over-year changes in the CPI may be high recently in part because the comparisons to last year’s levels were amidst the onset of the pandemic. But in the second quarter of 2021, compared to the first quarter of 2021 and on a seasonally adjusted basis, the CPI rose at an annualized rate of more than 8 percent, which is the highest quarterly growth rate since the third quarter of 1981.

It’s always worthwhile to keep an eye on alternative inflation measures, given the estimation issues associated with government statistics, and considering the source of those statistics. Along those lines, a recent survey of small businesses by the National Federation of Independent Business (NFIB) returned a result for prices that hasn’t been reached since 1981. And the prices component of the monthly Institute for Supply Management survey of business purchasing managers rose in June 2021 to its highest reading since July 1979.

Inflation can be considered as a tax, and an especially regressive one, falling harder on those with lower income and/or assets. Inflation can be considered one cost of government. But it’s interesting to consider (and we will, in coming months) how well the government a) measures inflation overall, and b) covers the cost of government as an element of the overall cost of living. Government sales taxes end up getting covered by the CPI, for example, as that statistic (uncertain and/or flawed in other respects) measures prices including sales taxes at the retail level. But significant issues arise for other taxes (like property taxes) that matter for the cost of government, as well as taxes that are not explicitly covered by the CPI (or related measures like the PCE deflator).

Back in the Great Depression, economists and government developed our modern framework for Gross Domestic Product (GDP, the total value of goods and services produced in a given period). There were four main components (C+I+G+NX) – Consumer Spending, Investment Spending, Government Spending, and Net Exports. Some have questioned whether the G (Government Spending) belongs there at all, from an opportunity cost perspective, as government spending relies on taxes or borrowing money that could have been spent by somebody else.