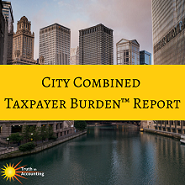 Truth in Accounting has released a new report on the 10 largest U.S. cities. The City Combined Taxpayer Burden report analyzes the finances of each city, its county, state, and underlying government units.

This report was necessary because most cities do not include several underlying government units, such as school districts, transit agencies, housing authorities, etc., in their annual financial reports. New York City’s accounting practice is an exception.

The City Combined Taxpayer Burden report takes into account these underlying government entities and provides residents and taxpayers in these cities with a more accurate and holistic view of their respective city’s finances. When the unfunded debt of these local government units is combined with both the municipal and state debt, city taxpayers are the hook for much more than they think.

The report also breaks down each government's debt to a per-Taxpayer Burden, which is each taxpayer's share of the government's bills after assets have been tapped. Here are the ten largest cities ranked from worst to best based on their Taxpayer Burden:

Click on the city name to see its two-page report or view the full report here. This report was based on the latest available information for all of the government entities (FY 2017).